After salary related questions the next most popular question I’m asked is the Vancouver or Toronto question. I think this is a much harder question to answer. We were struggling with this exact question, to us the west coast seems more beautiful and with better climate. The west cost appealed more to us coming from California. I’ll try to describe my thinking when I choose Toronto.

Vancouver is beautiful but ask anyone who lives in Seattle it is very rainy and overcast. Yes is not as cold as Toronto but then again its hard to go out in the rain especially if you have kids. In the cold not so with the right clothes you can venture out and when it snows its actually a little warmer and fun for everyone. Vancouver has more natural beauty right by the city while in Toronto is a little further away. Keep in mind both these places are technically on the top of the world so there is a lot of beautiful untouched nature for miles around. And you can always take holiday trips, spending the summer on farms near Montreal, hiking on the Canadian Shield or spending the summer on a lake site cottage are some of the popular options for people living in Toronto. While Vancouver gets a little more points here Toronto is not far behind.

Daily family life includes work, school, housing and safety. For us Toronto scored higher on these points. Vancouver has more drug related crimes, more expensive housing and lesser jobs. While there are a few tech companies in Vancouver including big ones like Slack, Toronto has the more active and fast growing startup ecosystem and has engineering offices of big name tech companies like Google, Uber, Shopify, etc. Toronto is also the finance sector of Toronto with banks hiring tech talent all of this makes for hiring paying jobs and an ecosystem I can bet on.

The entire corridor around Toronto which includes Waterloo, Kitchener and Montreal is a tech heavy. This area is also considered the birthplace of deep learning (AI) and a lot of the people heading AI at Google, Uber, Twitter are from here. Many are returning to start things like the Vector Institute with funding from Google.

While I don’t have data to prove this point, housing in Vancouver is considered some of the most expensive in the world. Toronto by comparison is more cost effective. You can even find a whole house with a back yard close to downtown in this city. Again I don’t have information on schools and parks in Vancouver but our initial trips to Toronto told us that there are great neighbourhoods here with parks filled with kids. The school my kid goes to is down the street from where we live its a really great school and my kids have made lots of friends.

We had friends in Toronto some who moved from Silicon Valley a few years before us and others who moved here from places like Singapore. They all loved this city and this helped give us more confidence in our decision. One final thing was that we felt Vancouver is too far away from everything while Toronto was next door to NYC, Chicago, Washington DC, Montreal and shorter flight times to India and Europe. Love to hear more opinions here on both places Vancouver and Toronto.

Why Vancouver Is Becoming North America’s Next Big Tech Scene

My husband is a manufacturing engineer (mechanical engineer) whereas I am in IT. Looking at a few statistics, we noticed that there are jobs for both of us in Toronto, Ottawa and Montreal.

a. Would you know of any other cities where we both could find jobs?
b. If I find a job in Montreal and he gets a job in Ottawa/Montreal, is it possible to stay in Ottawa and commute in either direction on a daily basis, especially in winter?

I would say Toronto its the most global and largest city of them all. Montreal can be a handful for non french speakers and also the winter is much worse. Ottawa, I’ve never been there I heard its mostly a government town.

I’m familiar with Vancouver as I have been there before, it’s just really similar to the west coast in the US. I would like to visit Toronto and just check it out. What would you recommend someone who’s interested in considering Toronto as their next home to do for a 3-to-7 day visit in the Toronto area? I would be less interested in the things/places for tourists, but more so for newcomers who are considering to settle down in the city. What are the areas that you would recommend in terms of housing choices and places where residents would go on a regular basis?

@Fan I posted a list here. I would we spent 3 days in the city (summer) on a visit before we moved here, it didn’t help us just feel the city. When we finally moved here we got a 2 month short term rental downtown and used that time to scout neighbourhoods. All the people I’ve spoken too say Vancouver is way more beautiful and no cold winters to deal with but it does rain a lot including though summer. They also said not as many jobs there and on the whole is more expensive than Toronto.

You’re not going to get anything as big as houses in Texas for the same prices you pay there unless you choose to live further away from the city. Even in Texas I doubt you would get affordable large homes close to downtown cores like Austin. I’m not very familiar with Mississauga but here is my list of great neighbourhoods close to downtown Toronto. These are highly walkable, safe, great schools, filled with young families, amazing restaurants, gyms and other such things. Riverdale Riverside L…

I just got back from Toronto on New Year’s Eve and boy oh boy was it cold there! (-10 C was the maximum temperature!) Although as @anon25417004 mentioned in another post, this is an aberration and it’s usually not this stormy or cold. Although it’s windier than where I live now (Utah). So I’d recommend going there in spring/summer if you just wanna visit and look around.

Definitely check out Niagara from Canadian side it’s much prettier. visit CN tower, walk around downtown, try the different food etc. that’s what I did on my first visit.

Yes Toronto is cold in the winter from what I’ve experienced its usually in the 0 to -10 range with days in the positives too. It peaks from mid December to mid Jan. It does not snow as much and over the two winters I’ve experienced I’ve never had to dig out the car or anything of that sort (I had to do that in Delaware during Univ. where it snowed a lot)

From what I’ve read about global warming freak storms are rising all over the world and the cold wave that hit Toronto was something a lot of the east coast had to deal with this winter.

Why the Bomb Cyclone Hitting the East Coast Is So Unusual

This is today and the rest of this week. 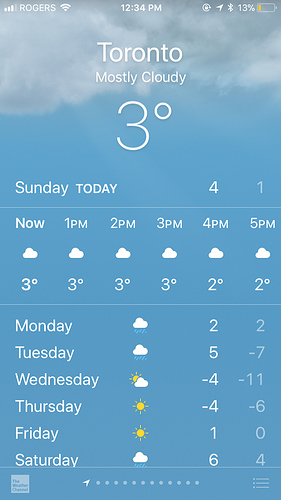