Is the job situation bad in Canada?

Hi,
I came across this post on Linkedin and thought I share it here to listen to the comments. 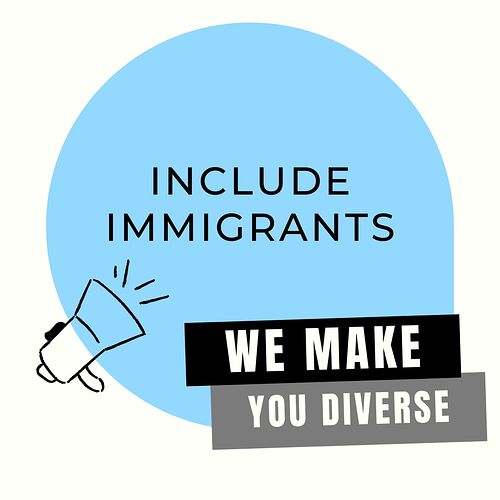 It's time I break my silence on the way skilled #immigrants are treated outside of their home countries. I moved to #Canada almost 6 months ago with big... 113 comments on LinkedIn

" It’s time I break my silence on the way skilled #immigrants are treated outside of their home countries. I moved to #Canada almost 6 months ago with big dreams and high hopes. Within the last couple of months-

It is high time employers understand that new immigrants who moved during Covid have had to face immeasurable emotional atrocity to settle down into a new country as “friendly” as Canada. They are adjusting to multiple fundamental things, all at once. And I am one of them!

At this point, I am losing faith in this so-called inclusive job market that is highly merit-based, and yet, they prefer hiring candidates referred to them by their network. So here’s my question to all the employers hiring in my network- Do you include immigrants and their pain points when you call yourself a diverse and inclusive organization?
"

This reads like a rant from a frustrated individual, so I would caution against applying to the situation as the truth. The author has some legitimate points in there for sure and I’ll try to add some color and commentary.

I think points 1, 3 and 4 are really about the same issue, the difficulty in finding employment. This is absolutely true that finding employment in a new country is hard, finding employment in a different city in the same country that you live isn’t easy either. There are two aspects to this, the first aspect is an individuals expectations and the sales pitch that Canada makes. It is very easy if you listen to the sales pitches from politicians and from expats who will paint an extremely rosy picture and therefore for people to have the expectation that they are going to waltz into Canada, find the perfect home, perfect neighborhood, the perfect job and live a happily ever after fairytale. This couldn’t be further from the truth. While it is absolutely true that there is a small minority of people who have this immigration experience (which may be a bit skewed here on this forum as a lot of the people here are moving after already establishing themselves in America and with jobs in hand).
The other aspect is that there is systemic racism discrimination in the hiring pipeline here in Canada, this is hidden behind the veneer of “Canadian Experience”. Talk to any recruiter as a newcomer and they will allude to this, during the hiring process and negotiations for renumeration this will be used against you. Now if someone told you that we think you have the right qualifications and want to make you an offer, however because the color of your skin is black/brown/yellow, we’re going to pay you 30% less than we would on the open market. Most people would find this revulsive, yet if you say the exact same thing and replace the color of your skin with “Canadian Experience”, then this is perfectly palatable and acceptable.
Another massive problem with employment is excessive bureaucracy and red-tape, we Indians are highly critical of our bureaucracy, things move slowly if at all and sometimes you need to grease the cogs of the wheel to get them moving. A lot of professions in Canada are heavily regulated and by design an exclusive club. The practice of medicine is one example, I was reading the story of an Indian doctor who had moved to Canada and she can’t practice here until she redoes here residency. She can’t get admitted into any Medical college because for around 300 seats across the country (for immigrant doctors), there are thousands vying for a place, leaving most unemployable. During the peak of the pandemic where fire fighters were trained and allowed to administered the vaccine (without any prior medical qualifications), she was still deemed “untouchable” and surplus to requirements. Here’s the link to the article.

That said, if you focus and look only for the negatives, there are plenty to be found but there are also positives. There are particular industries and sectors which have a critical labour shortage in Canada and if you’re an immigrant that happens to have this skillset or is willing to learn these skills then finding employment is a piece of cake a couple of examples are the IT sector and the trades (plumbing, electrical work, carpentry). So a successful immigrant is one who is either willing to retool and re-skill themselves to meet the needs of the job market and an unsuccessful immigrant is one who expects to waltz in, have a nice little walk in the park and maintain the highest quality of life.

I’m also going to dismiss the last paragraph, where the author first says that the market must be merit based, and then imploring employers to hire her because of here Immigration status.

Lastly I’ll address the couple of other points where the author talks about having difficulty in establishing friendship with who she calls locals and about being diagnosed with depression. I feel for the author, because the pandemic has been hard on everyone in the world but it’s definitely harder for people who’ve uprooted their lives and moved to a foreign country with no social circle. Depression and adverse mental health outcomes are a sad reality that I think we will deal with decades, this is an outcome of aggressive lockdown policies that the Canadian government has chosen to impose. While these policies may have somewhat softened the blow in terms of the death rate of the elderly, this has come at a cost of the mental health of the younger population of which teens and adolescents are probably the most negatively impacted and the effects of which we will likely see for decades to come. As for establishing friendships, I also acknowledge that this is much harder in this environment of fear. I know people in my neighbourhood who are so scared of catching the virus that they’re severely curtailed their interactions outside of their friends and family bubble. This is their choice and nobody can be compelled to make friends with anyone. You just have to persist really, find something that’s common between you and someone else. As parents of a toddler, our friends circle consists mostly of people who are in the same situation. We don’t have as many “local” friends as we have immigrant friends and we’re perfectly happy with this arrangement.

So to summarize, yes finding employment in Canada can be hard in many sectors and to be successful one needs to have the right expectations coming in and flexibility in aligning their skills with the job market. Making friends and the social elements has been harder due to the pandemic and I sympathize with anyone who has struggled with this. Realize this that you’re not alone, try to find someone whose in the same position as you and try to reach out, keep trying and don’t give up.

Jai Shree Ram @panditji I agree with most of your points and it was a good summary but I don’t think there is systemic racism - It all depends if you want to buy the “Canadian Experience” theory from the hiring manager - I would say this is the very first indicator to stay away from that firm. If we keep IT jobs aside - I see a diversity of ppl in each sector (retail, healthcare, transport etc) and have never seen non-whites stating this unless you want to work for some Christian religious institutes where 99% are local Canadians.

Now let’s come back to the IT sector - you don’t have to be from a technical background to jump into IT sector - I have seen ppl from HR, Sales, Retail - becoming recruiters and they are earning hell $$$. Why not learn a new skill which can give your fruitful results and leverage hot market condition.

I totally agree this pandemic has impacted the mental health of so many folks - somehow I feel we can’t blame 100% on pandemic for this - It has been cooking since the start of social media back in 2008-09 and now it peaked in a pandemic.

Jai Shri Ram @swamiom, you are right racism is the wrong word in the context. I’ll update my post to say discrimination instead. You’re also correct in suggesting that this is a flag that one should look out for whilst finding employment. However one struggling with finding one in the first place might not have this luxury.

Your example about people retooling and aligning their skills to match the needs of the job market is also on point as is the reality that the pandemic isn’t solely responsible for the mental health epidemic, it just accelerated and moved things to a breaking point sooner.